Cherie and Jason travel all the way from South Wales to see Professor Noel Fitzpatrick with their rescue dog, Kane who has a badly bulging disk in the bottom of his spine.

Kane has lived with Cherie and Jason since he was a puppy, and is a firm favourite member of their family, even taking priority at home and sharing a bed with Cherie while Jason is relegated to the spare room! When he was younger, they would all walk together in the welsh mountains but now Kane can only walk for 20 minutes a day, which for a German Shepherd of his size is not enough to keep him happy.

On top of his spinal condition, Kane also has arthritis in both of his hips which is worsening and making him bunch up so that the pain in his spine is worse. Upon examination, Noel identifies that Kane is in constant severe pain, and something must be done to improve his quality of life. He wasn’t responding to medical management. Two vertebrae in the lower part of Kane’s spine were collapsing together due to degeneration of the disc and resulting in inflammation and new bone formation which was causing entrapment of the spinal nerves to his back legs, resulting in constant pain and disability. Very painful sciatica was affecting both back legs every day. 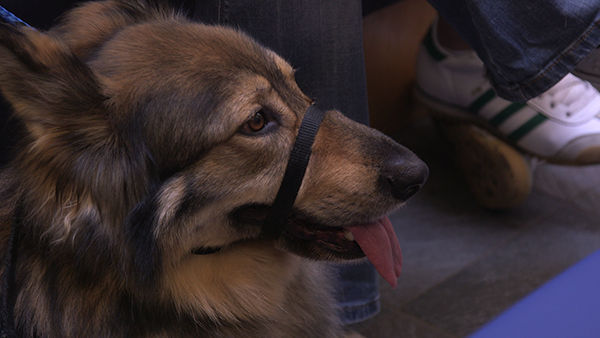 Cherie and Jason are in no doubt, they want to give Kane every chance of a happy life and ask Noel to undertake an operation called Lumbosacral Distraction Fusion on Kane’s spine.  In this procedure Noel will pull the two squashed vertebrae apart, placing a spiral bolt between them to keep them in place and then fuse them together with further rods and screws to allow his spinal nerves  room to recover and alleviate the pain. Noel and his team invented this technique. The spacer screw bolt is called a Fitz Intervertebral Traction Screw (FITS) and the screws and rods are called a Fitzateur. If this is successful, the arthritis in his hips could be managed medically.

5 days after the operation Kane was doing amazingly well, and the next challenge was to manage his exuberance now that his pain was gone so he didn’t undo all of the teams work!

Months later and Kane is back to where he belongs, full of life and running around the welsh mountains he loves so much.